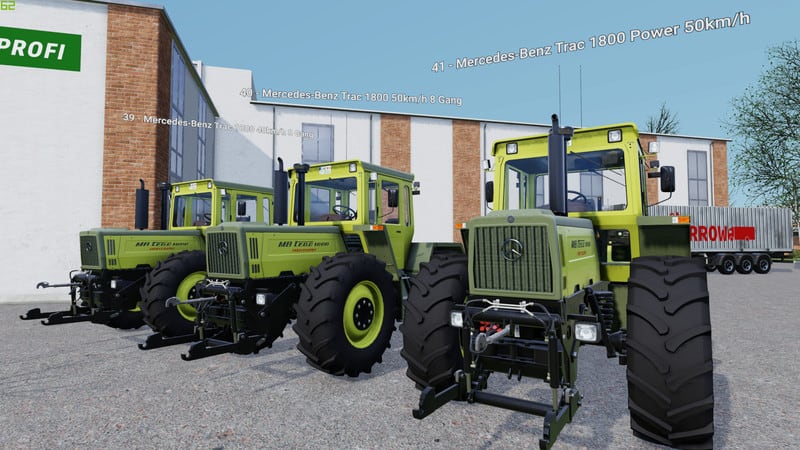 WARNING: The .zip file must be unzipped into the mod folder!!!

The following things have been adjusted:
– Real gear ratios of group N of the transmission (group shifting e.g. for creep gears is not supported by CnC at the moment). There are a total of two transmission variants for the MB Trac 1800. In addition, a performance-enhanced version has been added, which is only available in the shop in the 50 km/h version.

This variant corresponds to the vehicle in play with the short final drive ratio (to be seen in the gear table on the dashboard).

The 8th gear was often opened by the Trac drivers in the transmission to go faster, or to save fuel at 40km/h, because then the engine does not rev up as much.

The 8th gear was often opened by the Trac drivers in the transmission to go faster, or to save fuel at 40km/h, because then the engine does not rev up as much.

– The shifting behavior in automatic mode was individually adapted for each gear.

I had to make compromises here because there are no load-dependent switching thresholds. So it can happen that the transmission sometimes shifts back and forth in the field because one gear is too low and the next too high. But this happens relatively seldom.

– The efficiency through the gearbox has been changed to a realistic value. As a result, the Trac has lost about 25% of its power!

– The power development is not so spontaneous anymore. The throttle response is significantly reduced. In general, I have tried to find a compromise that works well in the field as well as on the road. All in all, the Trac must now work much more. Loaded trailers are harder to pull and inclines have a significant influence on the final speed. Ploughing with the 180 HP version works best with the 6 share Lemken. The 220 hp version also pulls the 7 coulter quite well.

– The prices and rental costs have been adjusted in the shop for the 50 km/h and the 220 PS version.

– The fuel consumption was also adapted for the 220 hp version.

known problems and hints:
The cruise control does not work at high and very low speeds below 5 km/h. Unfortunately, I have not yet found a solution to the problem.
Since version 1.0.2.12 the helpers (1, 2 or 3 stars) differ in their working speed. Since the engine power is much lower than the original version, it usually makes no sense to hire a worker with more than 2 stars, since the working speed is very often limited by the engine power.