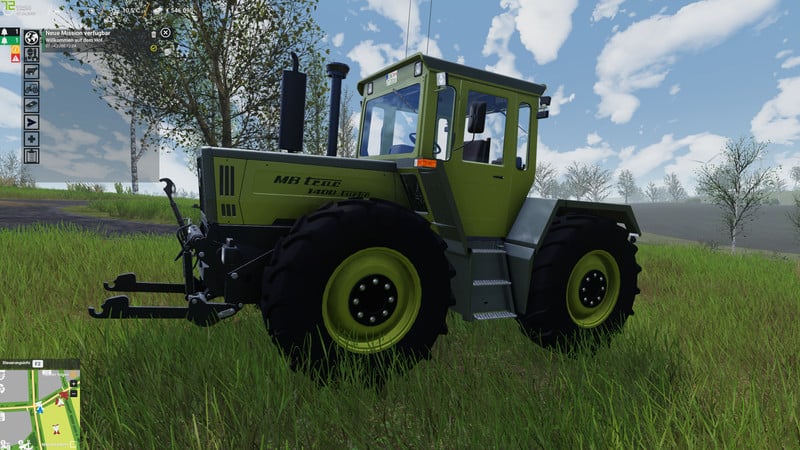 The following things have been adjusted:
– Real translations of the second group of the gearbox (several groups do not support CnC at the moment, so the field group is not available). There are a total of three transmission variants that occur in reality like this.

This variant corresponds to the vehicle in play with the short final drive ratio (to be seen on the gear table on the dashboard). was delivered ex works.

This variant was also delivered from the factory with the long final drive ratio.

The 8th century The 8th gear was often opened by the Trac drivers in the gearbox (illegally) in order to go faster or to save fuel at 40km/h, because the engine doesn’t rev up as much then.

– The shifting behavior in automatic mode was individually adapted for each gear.

I had to make compromises here because there are no load-dependent switching thresholds. So it can happen that the transmission sometimes shifts back and forth in the field because one gear is too low and the next too high. But this happens relatively seldom.

– The AI is now faster on some jobs (e.g. cultivating), because the changes shift to the next higher gear.

I can give the following hint: I have noticed that the AI with the Trac, the 3m Köckerling cultivator and weight block sets 10 km/h as working speed on the field. Without weight in the front hydraulics it is 15 km/h, which is set by the cruise control. This must be related to the total weight of the vehicle. The gear selection of the AI also depends on the preset speed. I could not find out why only the 3rd gear is used for cultivating and the 4th gear for 15 km/h. It works much better when ploughing. There the AI uses the gears sensibly. Therefore I recommend to let the AI work with cultivator without front weight, because the 15 km/h are not reached by the tractive power anyway. At the same time, the speed of rotation is reduced and thus fuel is saved.

– The efficiency through the gearbox has been changed to a realistic value. As a result, the Trac has lost about 25% of its power!

– The power development is not so spontaneous anymore. The throttle response is significantly reduced. In general, I have tried to find a compromise that works well in the field as well as on the road. All in all, the Trac must now work much more. Loaded trailers are harder to pull and inclines have a significant influence on the final speed. Ploughing works best with the 4-share Lemken. On level fields, the 5 coulter also works. If it becomes too steep, the speed with the 5 coulter can be reduced to 3 – 4 km/h.

– The tank volume was corrected to 240l.