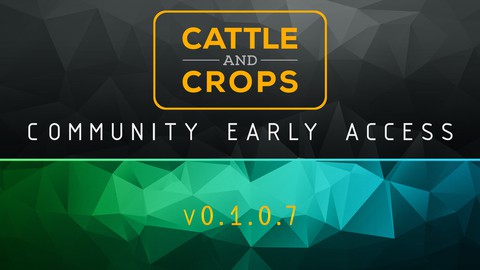 Todays Update v0.1.0.7 is the foundation for the steam release. After this release we will only fix important bugs. After that, this version will be available on Steam on 02.13.2018.

The following new features are waiting for you:

Autopilot drives to Waypoint: You can now add waypoints on the mini-map with a right click of your mouse. If you start the autopilot (default key “N”), the vehicle will automatically drive to this destination as long as you are in it. You can also use this feature to navigate to the next waypoint during a mission.

Info-Popup: If you hold the ALT-KEY you get more information about the fillLevel of tanks and vehicles. There will be a more detailed overview in the user interface soon.

Analog Control: It is now possible to use your mouse to control analog functions of your vehicles and machines. You can assign five buttons in the control settings. The first button controls Quickslot 1 and 2, the next 3 and 4 and so on.

Fieldwork-Employee now works better with save games – he will not do his work inverted when loading a savegame.

Driving behaviour: We have further reworked all machines regarding their suspension and vehicle physics. All tractors now have a slightly spring-suspended rear axle to simulate the suspension effect of the tires. Implements like the plow are not permanently hydraulically re-adjusted when in the ground. The machines now run on the ground on the support wheel/roller and the rear hydraulics in a floating position.

XP, level system: We now have experience points (XP) for: walking, driving, field work and harvest. When a certain XP stage has been reached, the level is increased. This enables other presets (more possible employees, fields, vehicles…).

Achievement system: You now get rewards for certain activities, for example: ‘Drive 10km’. There are multiple categories. The achievements can be reached relatively fast and are still work in progress. The achievements are not bound to an account, but depend on the savegame profile.

Community questions: Till the end of next week we will also answer your questions from the forum again. We will keep the answers a bit shorter, but in return answer more of them.

All changes, bug fixes and new features you can check out in our changelog as always.